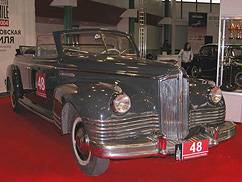 ZIS 110 is a high-class car. It was available as sedan, cabriolet and estate car. The presented car ZIS 110 has belonged to Hrushyov at his time. The ZIS produced passenger-cars since 1936. The first of these was the representative Limousine ZIS 101 which construction was based on the one of an American model Buick Eight 90. Technologically advanced cars have been produced until the year 1941.

During the five years 8752 cars were produced. After the end of the war the ZIS returned to the production of representative level cars, but on a smaller scale already.

The model 110 was designed on the base of American models “Packard” 180 from the year 1941 and “Buick Limited 90”. During the period of 1945-1958 years 2089 cars were produced, including cabrio, phaeton, taxi and ambulance car. The construction of both ZIS 101 and ZIS 110 was influenced by the American engineering school.

The ZIS 110 was the first automobile of the USSR to have an all-metal body. The produced cars featured in-line 8-Cylinder motors with engine power of 140 h. p., hydraulic jacks and thin-shell bearing of the crankshaft. Further features included fluid flywheel in transmission, semiautomatic gearbox and independent suspension of fore wheels, main hypoid gearing and separate drive of front and back brakes. The options of the ZIS included radio, advanced evaporation and heating system, hydraulic window raisers and a glass partition behind the front seat. The model was produced in large quantities. Not only Limousines ZIS 110 but also Cabriolets ZIS 110 B have been produced. The last ones appeared at military parades of the fifties and were used for filming right up the end of the eighties.