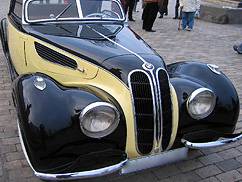 Like its predecessors, which were also equipped with a 2-liter engine (BMW 320, 321 and 326), the 327 had a low slung box-section chassis, on which car bodies manufactured by “Ambi-Budd” coachworks in Berlin-Johannisthal were used. “Ambi-Budd” and “Autenrieth” in Darmstadt were BMW’s largest suppliers of car bodies in the 1930s.

“Hurth” and “ZF” supplied the four-speed transmission (with freewheel facility in first and second gear). The drive ratio was identical in both types, and the differences in the individual gears were minor. What was different was how the doors were hinged — at the front in the convertible and at the back in the coupe.