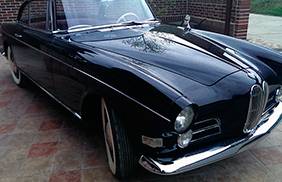 The 503 was the first German automobile to have an electrically-operated power top. Another unique feature of the car was the transmission, which in early models sat under the front seat and was not directly connected to the engine. The body was made of all aluminum. The price of 30,000 Deutsch marks limited sales. The 503 was available as a 2 door coupe and cabriolet. Only 412 models were produced, with 273 coupes and 129 convertibles.

The BMW 503 was designed by Count Albrecht von Goertz, the same man who designed the BMW 507. BMW ads referred to the 503 as “an elegant luxury travel sports car from the stable of the large BMW eight-cylinder cars”. The “large eight-cylinder cars” was a reference to the Baroque Angels, BMW’s mainstay at the time.