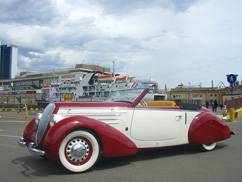 The third generation of automobiles, with appearance of which Stair again became a rentable product, which was constructed and designed with certified engineer Carl Enshke (1899-1969), who worked from 1922 with Stair and from 1930 was the head constructor, successor of Dr. Porsche. Four and Six-cylinder models of this line are characterized with its technology and form with their unusual medium details, which were beloved with wide range of customers. During engine manufacturing, Enshke followed Porsche conception. The only exception is the fact that for the purpose economy of financial means to the given four cylinders he added standing valves. There was new undercarriage with one torsional-tough platform-frame and with cross spring of front axle, and with renewed pendulum-back axle.

Theis Steyr 220 Glaser Sport is not a usual vehicle of Austrian production. The one was produced on special demand on Glaser in Dresden (Germany). Possibly, it's only one vehicle in the world in that kind of body.

Original and esthetically beautiful were coupes with streamlines, although in general they were four-door limousines with radial tires, frameworks and breakers, which were manufactured out of Metal cord and in a way, it is wooden-metallic construction with addition of glass. Special performance of order were produced and supplied with Erdman & Rossi and also with Austrian coupe manufactures for auto market. Automobiles with four cylinders are durable and reliable in exploitation. This automobile could not be called sport one, but with this car You are fearless, when coping quietly with steep ascent of 32 %, which expects every fast Austrian from his car.

Much more capacity is allowed with six-cylinder auto, although, first of all, only the model 220. Deserved confidence and win high status among customers. In Austria given model rightfully belongs to last pre-war years, in which automobiles were still produced and to automobiles of high standards. Model 125, which foregoes model 125 (also known as 125 Super) war produced exceptionally for German market. During the war, cabriolets with six cylinders from Stair were destined for many headquarters officers and for other commanders. They were marked with state emblems and symbols.