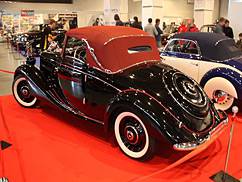 The Mercedes-Benz 170 V was introduced at the Berlin Auto Exhibition in 1936, however its production had been started since the end of 1935 already. The new model 170 V was technically less pretentious and it’s appearance was driven by less ambition, in comparison with the 6-cylinder Type 170 (W 15). So as a mass production type it has become just like a car for every day and for everyone.
It had become the most built Daimler-Benz passenger vehicle of the prewar period, moreover it has appeared a departing point for a successful postwar development program. Originally it was meant to appear as a Type 160 V on the world market. The first 3000 cars had a 1.6 liter engine (bore × stroke, 72×98 mm). The rationalization of the assembly work was considered as one of top goals, therefore the model had been available in many car body modifications in the prewar period which didn’t appear after the end of the war anymore.