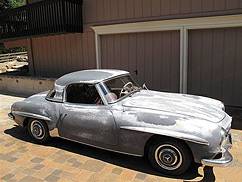 Max Hoffman, official dealer of Mercedes-Benz in USA was gloating over his success. He was the one who at the risk of his own name and financial means stood upon nascence of new car-line for American Bohemia. Hoffman was hard and fast to throw up the kids on sweeping the American market, a difficult one, full of huge monsters with shark paddles. He got his money worth. They were cheered by the public forming lines already to get the novelty. While the model 300SL was quite completed already, the Mercedes-Benz 190SL remained an unfinished one. Its final version appeared at the auto show in Geneva a year later.

The Mercedes-Benz 190SL presented in Geneva was much different from that one which was introduced in New York. The series-car Mercedes-Benz 190SL got a new engine, lose its overhanging front inlet; its back lights, forms of front and back wings also changed. The preparations for mass production of the model were started since the beginning of the year 1955, the production itself began in May already. Till the year 1963 when the last car rolled off the production line, the exterior view of the model had been constantly improved, only the engine remained the same.